I am fortunate and grateful to have experienced a night in the life of Atlanta’s Grady Hospital Emergency Management Services (EMS), to have witnessed incredible fortitude among people who specialize in saving lives.

A kid threatens to jump from the interstate overpass. After her car slams into the median, a woman is pulled from the vehicle, lucky to be alive. An elder who fell off the loo appears to have internal bleeding at the temple. Hospital beds are occupied by homeless people who hurt themselves to find shelter from 23 degree temperatures. A 16 year-old mother with bipolar disorder may be a threat to the 10+ people also living in her small house. Paramedics restrain and sedate a belligerent woman who was found in the street, beaten and possibly raped. In an overcrowded, government-subsidized housing project, with her mother’s encouragement, a teenager cuts her wrist. A man, pale from bleeding out, is helicoptered into the ER with fifteen gunshot wounds (GSWs); we watch as a team of doctors fights to stabilize his condition. Each of these incidents comes with its own set of lessons and heroes.

Who wants to deal with that? Hometown heroes.

It takes a special kind of person to be a front line emergency responder. They are vigilant, calm under pressure, dedicated to their trade and willing to put themselves at risk to help others. They patrol the city’s most dangerous neighborhoods — places I thought only exist in cinematic exaggeration. From deployment strategists and dispatch operators, to police officers and firefighters securing the scene, to ambulance paramedics and doctors racing the clock, it’s an impressive network of people working together for the greater good.

My gracious guide said it just right. “You see the best and worst of humanity, all at the same time. You do the best you can and hope to make a difference.”

Tonight concludes with new perspective on emergency response, medical care, poverty, spirituality… and feelings of admiration, hopefulness and inspiration. Huge thanks to LEAD Atlanta for making this possible.

Sleeping next to this guy tonight! Thanks to the Atlanta Fire Rescue team at Station 38 for letting us tag along. And thanks again to LEAD Atlanta for making this happen. 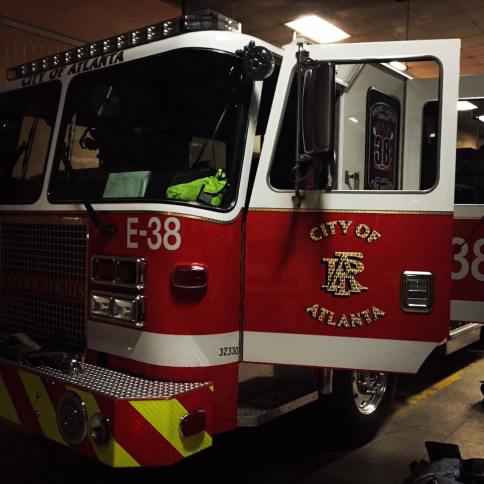