Traveling through Southern Israel, the West Bank and North through the Golan Heights, it’s hard to believe that this beautiful country has an Al Qaeda problem or that it is the target of rocket attacks. Everyone we encounter is friendly, helpful and eager to share their knowledge of the area’s history. This has been a quick trip, but memories of the experience will last my lifetime.

The spirit of religion and sense of isolation from modernity are genuine here. Jews praying at the Wailing Wall do so with a facial expression of intensity. If you allow yourself to become lost in the moment of observation, it’s easy to imagine this very scene taking place hundreds of years ago. The same could be said of majestic Masada, a plateau overlooking the Dead Sea and UNESCO World Heritage site where Herod the Great built palaces (37 BC) and Jewish settlers committed mass suicide in the face of the approaching Roman army (73 AD). The Dead Sea is likely the most beautiful body of water I’ve ever seen, with its white salt shoreline and rainbow of colors fading with the sunset. 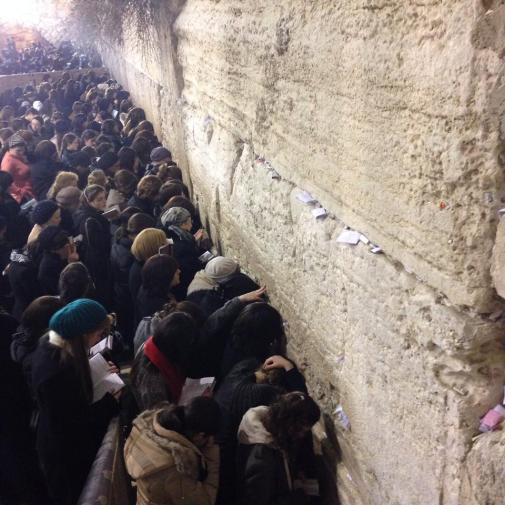 Construction of the Wailing Wall may have begun as early as 19BC and is one of the most sacred sites for Jewish prayer. — ‎at ‎Western Wall הכותל המערבי‎

Dinner in a cave within the Armenian Quarter, Old City, Jerusalem 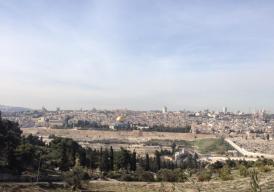 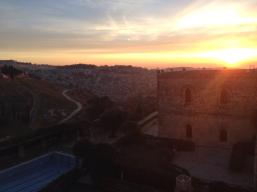 Jerusalem is a stone city, and this is a view of Via Dolorosa.

My new friend, Farraj, escorted us through Church of the Nativity. He plans to visit us in D.C. one day. 🙂

The Dead Sea is so concentrated with salt that the shore is white with salt stalagmites. — at En Gedi 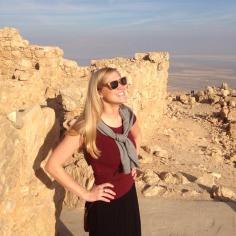 Looking forward to a great afternoon atop Massada

Road tripping through a beautiful place, near Masada

Who thought you could find lake cabins in Israel?

Driving north for a few hours lands us in a cabin overlooking the Sea of Galilee, which is actually a lake that seems to fade into the horizon in a way that makes it appear endless. Tasty local wine and a hot tub bath with the lights of Tiberius as backdrop – this is the perfect way to end an Israeli good day.

Next: we drive even further north, through the Golan Heights. Evidence of long ago and recent conflict surrounds us, from shelled-out buildings to roadside mine fields. UN trucks and military vehicles are commonplace. We reach the end of our map and GPS capabilities, and keep going. We drive through Majdal Al-Shams toward Mt. Hermon and the point where Israel, Lebanon and Syria converge. At the end of this road stands a sign that reads Never Stop Exploring; this is appropriate considering my company and the fact that we are repeatedly listening to Ludovico Einaudi’s Divernire. A cable lift to the peak takes us as far as one can go in Israel without hiking into uncharted mountains. The Israeli-Syrian ceasefire line is just a few kilometers away.

The Sea of Galilee blends into the sky at the horizon, so it appears to be never ending.

It is a great view of Tiberius and the Sea of Galilee from our cabin community in Ramot.

Approaching Tiberius, the Sea of Galilee lake looks vast enough to be a sea.

The red body of this lone canoe starkly contrasts with the soft blue Sea of Galilee, perhaps the best shot of the trip.

Explosives are sometimes found in the fields, so don’t go for a nature hike in uncharted areas.

Across Golan Heights, abandoned dwellings and military structures are gutted and pocked from artillery fire.

Mas’ade is one of several small communities on the way to the Mount Hermon summit.

Gutted, abandoned structures like this speckle the landscape on the road to Mt. Hermon.

From the summit of Mount Hermon, you can see “the triangle” where Lebanon and Israel meet Syria. Here, we are just a few kilometers from the Israeli-Syrian ceasefire line.

In just two days, we’ve been to the lowest point on earth’s surface (414 meters below sea level) and Israel’s highest point (2,814 meters above sea level). This is just one personal record set this weekend. It’s been an especially pleasant trip, perhaps the best yet.