A hot bus ride through typically chaotic traffic takes us from Ho Chi Minh City to the market town of Mỹ Tho (mee-toe). We negotiate a package deal to include a local guide, motorbikes, meals, a floating market tour and lodging in a homestay for $120/person. Our trek into the Mekong Delta begins!

Main roads are flooded with motorbikes. A family balances on their scooter and a child sleeps in her mother’s arms, coasting down dirt roads lined with simple dwellings. Inside most huts a television glow illuminates the darkness, symbolic of modernity breaking through isolation. With striking rice patties in the background, kids play fútbol in a field, never minding the water buffalo grazing nearby. It’s primitive and beautiful.

Our guide stops our caravan on a bridge overlooking a burnt-out helicopter crash site overgrown by jungle underbrush. He repeatedly ensures us that his family never opposed the U.S. during the Vietnam War and shares his firsthand account of battle. With a matter-of-fact tone he outlines history of the “American Resistance War,” similar and different from American Harry Constance’s account in Good to Go.

It’s no wonder my parents were surprised and concerned that my friends and I planned to visit Vietnam. Their perception of this country is still framed by horrible memories of friends killed in action and news that demonized Vietnamese people. Folks here may have been on the other side of the conflict or caught in the middle, but they all share the loss and pain caused by war. The war impeded civic progression in an already underdeveloped country, and scars from that era are tangibly found in the local culture and physical landscape.

After five hours of countryside riding we stop again, this time atop Cần Thơ Bridge overlooking Hậu River and the city of Cần Thơ, colorfully illuminated like an amusement park. From there it’s a difficult ride, the pitch-black darkness pierced by streams of light coming from a mass of motorbikes. Even those of us who just biked down the Ho Chi Minh Trail are a bit nervous about the crowd of unruly drivers.

A streak of alarm passes through me as our guide leads us through a sketchy underpass, onto a gravel drive, into the jungle. It’s getting late and we don’t know exactly where we are; either he doesn’t either or he’s calling ahead to announce our arrival. “Just a bit further,” he assures us. As I’m considering jumping from his back seat and onto the back of my friend’s ride, a set of bamboo huts and backpackers emerge from a clearing ahead. Whew – I could use a nice, cold Bia Ho’i!

This neat little enclave in the middle of the steamy jungle is a nice reprieve from unnatural noises, technology, modernity. A cold shower isn’t enough to suppress the sticky heat, but we’re happy anyway, relaxing. Beers are self-served on the honor system, and community tables offer the chance to meet fellow travelers over a locally-caught fish and rice dinner. One backpacker, a day trader from NYC, has wandered the region for six months.

I usually have vivid dreams, and tonight is no different; I wake, scared by the noise of a seemingly large animal (or evil ninja) running atop our hut. Maybe this mosquito net doubles as an invisibility cloak? My fear is quickly quelled by the sound of my friend snoring like a wild bear in the next bed over; at least the jungle cat will get him first! 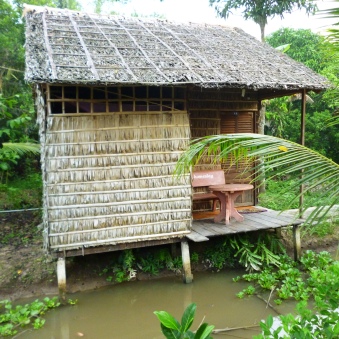 Home for the night

Mosquito nets will save us from malaria! 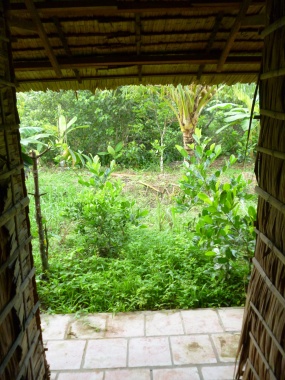