Our first visit to Istanbul is like being in a fairytale, like nothing I’ve ever seen before. It’s New Year’s Eve 2009.

Only a few hours after arrival, we wander upon Ortaköy Mosque just before the fifth and final Friday prayer. It’s startling to hear the adhan (call to prayer) over the city’s loudspeakers, but a Türkçe speaking local makes us feel at ease. He smiles and motions for us to remove our shoes and for me to cover my hair, then directs us to observe from a kneeling place inside. He motions that we are welcome to take photos. I feel like a privileged guest as the setting sunlight twinkles in the chandeliers above.

The rooftop view (see above feature image) from our hotel, the Conrad Istanbul, is breathtaking. From here you can see the Hagia Sophia, Sultanahmet (Blue) Mosque, Galata Tower and other must-see sites. Boats make their way down the Bosphorus, the strait that separates Europe from Asia. A river cruise is the best way to see the contrast in architectural differences between Turkey’s European and Asian sides. Armed with Istanbul: The Imperial City, we head to the old Istanbul peninsula via tram.

Ortaköy Mosque during the adhan (call to prayer)

Such a good travel companion, studying to to tell me the history of Istanbul 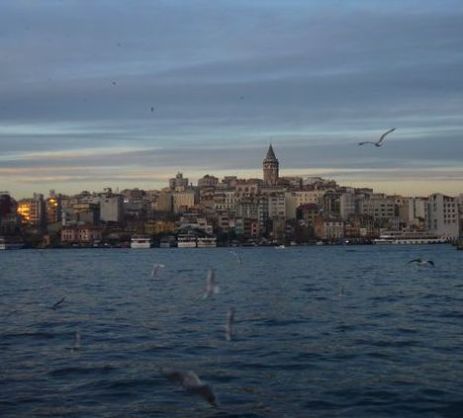 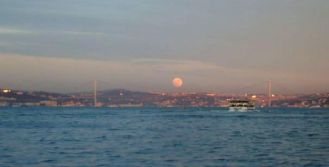 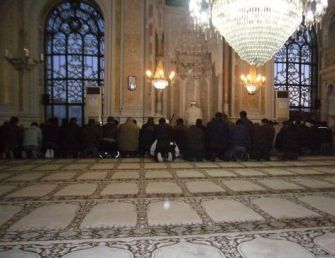 Ortaköy Mosque view from a cruise down the Bosphorus

History’s apparent in the aesthetics.

When Byzantine structures were converted to mosques by the Ottomans, many Christian symbols remained. Considering the history of struggle between the two religions, it’s interesting to see remnants from each empire in buildings considered holy to both. 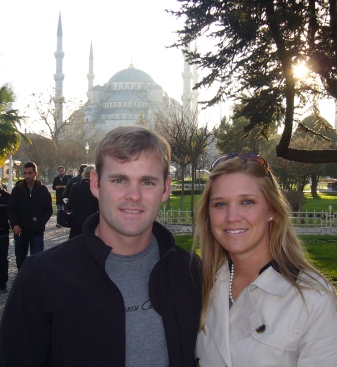 Always with the snacks! 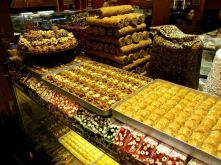 Walking from the Bazaar to the underground Basilica Cistern, we’re lured into a carpet shop, despite insistence that we aren’t in the market to buy. The salesman, Rajeer, offers Turkish tea that tastes like warm apple juice. It turns out that he studied in Germany and traveled the world before returning to the family business. He inquisitively asks about our backgrounds as he places a $300K hand-made carpet in my lap. It’s a rewarding exchange of culture.

In Germany, Turkish immigrants have a bad reputation because they’re often associated with gangs, graffiti and jumping American soldiers stationed there. (Many of these immigrants are stuck between a rock and a hard place: Germany doesn’t want to renew expired visas, and their home country won’t allow them to return.) Here in Turkey, the Turkish people are nothing but gracious hosts, anxious to share their culture.